Update: If you’re the owner of a Danby Danby DKC645BLS and can no longer control your temperature or are getting flashing “EE” errors, see the additional question answered below.

Possibly because the number of craft breweries is exploding, possibly because of the economics of scale and possibly just because beer is delicious, a lot of people have been asking me about buying a kegerator. Since we got ours in February of 2012, we’ve had a lot of interesting things on tap at the house. Allagash Bourbon Black, Dogfish 120 Minute, Lost Abbey Deliverance, a hell of a lot of Curieux and even some Zymatore Bourbon Aged Alvinne Melchior. All of these have been significantly cheaper in keg form than they would have been in bottles, and some were never available in bottles in the first place.

All of which is a long way of saying, almost two years later, we’re very happy with the purchase. But many of you remain unpersuaded by the stock “go buy one” recommendation, and have actual questions about getting, owning and using a kegerator. If you’re one of those people, this is for you.

The Amazon links below are affiliate links, just FYI.

Q: Do you end up drinking more beer if you own a kegerator?

A: At first, yes. The novelty of being able to pour your own drafts at home is huge. I drank way too much Weyerbacher Heresy the first night we had ours. After a week or two though, no. I compare it when people ask me this to a water view: it’s something you appreciate, but also something that fades into the day to day background of your life. Add in the fact that sixtel kegs don’t contain as much beer as you might expect and the answer is no, after a little while, a kegerator is unlikely to have a meaningful impact on the amount of beer that you drink.

A: A sixtel is 1/6th of a full keg, the most common size you’ll find for home consumption. A full sixtel weighs around 58 lbs and contains 55 12 oz pours of beer, per Micromatic. Pony kegs are the next size up, and represent a 1/4 of a full keg. They weigh just shy of 90 pounds and contain 82 12 oz pours. A full keg, or half barrel, which you’re not likely to need unless you’re throwing a large party, weighs over 160 pounds and contains 165 12 oz pours. But again, if you’re a craft beer fan, you’re probably going to be dealing primarily with sixtels. And when you have a bunch of friends over, you’ll be surprised at how quickly you can go through 55 12 oz pours.

Q: How long do kegs keep? Do I have to drink them right away to prevent them going bad?

A: The design of the kegerator insures that no air actually ever touches the beer – only CO2. This means that as long as you’re using a keg on the kegerator only, it will keep as long as the beer will. If you’re an IPA fan, you’re probably going to want to blow through the keg very quickly because the hops will fade in a matter of weeks, washing out the taste. If you’re into sours, or dark, higher alchohol beers, you can store these for years. Many of these will taste better, in fact, if you age them. We’ve got a couple in the basement, in fact, that are around a year and a half old.

Q: Where does one buy kegs?

A: From a liquor store, naturally. The challenge will be finding one that will actually tell you what kegs they have available. For reasons that have never been clear to me, many liquor stores will not be able to tell you what kegs they can sell. They’ll answer your question – “what do you have?” – with their own, “what do you want?,” failing to realize that the answer to the latter depends heavily on the former. We’re very lucky to have Bier Cellar here in real Portland, and Greg does an excellent job of keeping his keg lists up to date. If you’re down in the Boston area, Julio’s lists theirs as well. In other cases, hit up the best craft beer venue nearest you. If they don’t sell kegs themselves, they might be able to give you a line on where to get one.

Q: What kind of kegerator did you buy?

A: We bought a Danby (my Amazon review here). Nothing has changed since that original review, either: the kegerator has, in general, been issue free. One review, however, suggests that our specific unit has been discontinued. So that might be a problem.

Q: Where did you buy your unit?

A: Amazon. The Prime free shipping was too good to pass up.

Q: What should I look for in a kegerator?

Q: How much does it cost to operate a kegerator?

A: Electric costs, at least for our model, are marginal. The Danby we have will theoretically operate for a year for around thirty dollars of electricity.

Q: Do I have to cover the lines to protect them from fruit flies?

A: It’s recommended. Get one of these for a couple of bucks and you’re all set.

Q:  Will my kegerator be compatible with any keg I buy?

A:  Sadly, no. The overwhelming majority of kegs will be compatible with the standard coupler that comes with a kegerator, called a Sankey coupler, but some kegs – particularly European ones – will require a different coupler. That said, if you’re set on a particular keg, swapping out a coupler for a different style takes maybe five minutes.

Q: How about set up? Are kegerators hard to put together?

A: It might seem complex at first but it’s not mechanically challenging. If you think of a kegerator simply as a fridge with some hoses to hook up it’s easier.

Basically you screw the faucet/tap into the refrigerator unit, screw the seating assembly for the tank onto the unit, connect the hoses and clamps to the regulator (CO2) and the keg coupler and you’re done. You’ll probably want something sharp to trim the lines, if necessary, along with a screw driver and a monkey wrench.

Q: Where do I fill the CO2 tanks? Or trade them?

A: For CO2, the easiest place to find it is at your local brewing supply place – in my case, that’s going to see Rob at Maine Brewing Supply. If your local supply place doesn’t have it, they’re likely to know who will: some kegerator owners have to go to medical oxygen supply houses for their gas.

Q: I bought a Danby DKC645BLS but can’t control my temperature, am getting a flashing “EE” error and the unit is making loud beeping sounds. What do I do?

A: The bad news is that, in all likelihood, your display board is fried. The good news is that it’s easy to fix. Though the unit is no longer manufactured by Danby, you can purchase a replacement part here. From there, it’s three screws from the back of the kegerator to remove the top of the unit and expose the board. Disconnect the various connections for temperature sensors, etc, and unscrew the two screws holding the board in place and remove it. Reverse the process, power the unit back on and you should be back in business.

Other questions? Things you need to know before buying a kegerator? Leave a comment and I’ll answer it if I can.

I would love to tell you that I spent my vacation at places like Houston Brook Falls. But we’re homeowners now, so vacation is just another word for work. While I did take an afternoon off for my annual pilgrimage to swim under the falls, I’ve spent the majority of the past few weeks covered in some combination of grout, mastic, paint, sawdust, stone dust, wood glue and tiny shards of tile.

On the one hand, this is less exciting that than killing lazy August afternoons on the boat with a growler of Oxbow and a couple of John D MacDonald novels. On the other, a lot got done.

This, for example, was our kitchen when we moved in. 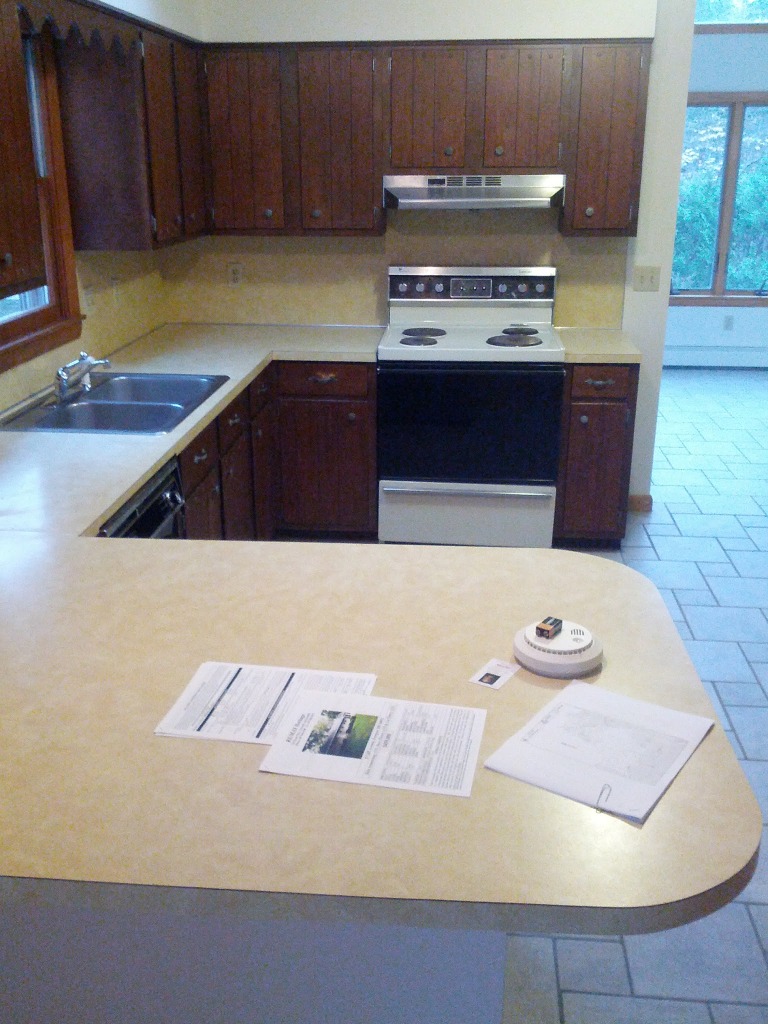 After finishing off the tile – and for your sake, don’t look to closely at the grout lines or you’ll get seasick – this is what it looks like today. 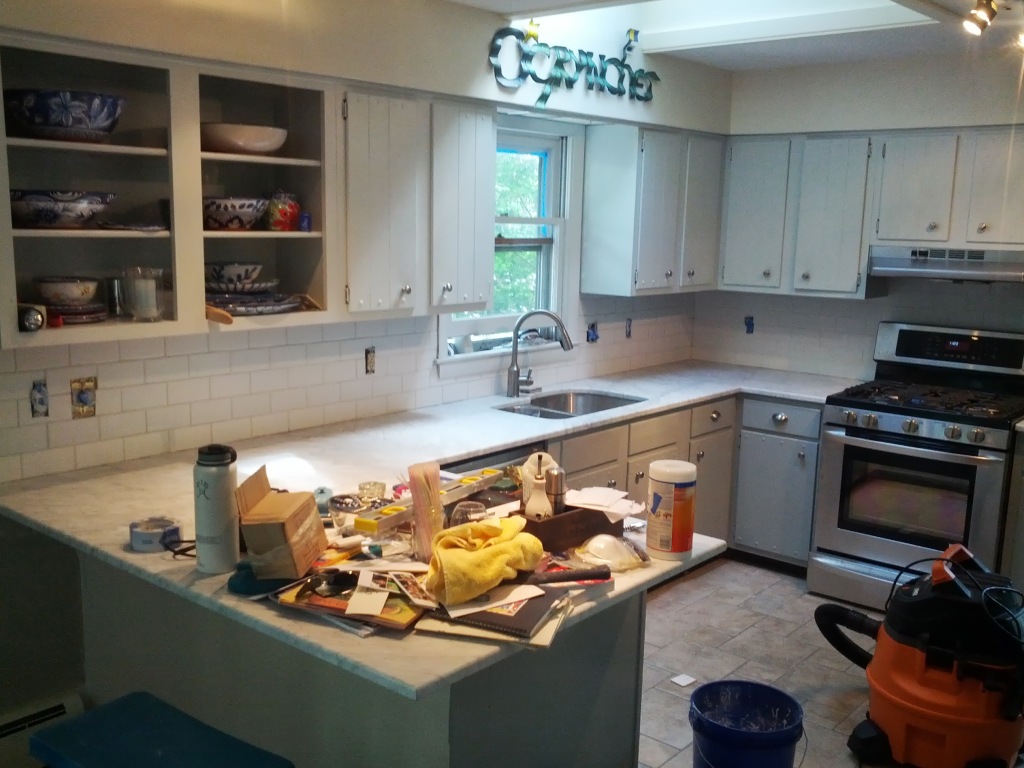 Even with the amateur hour backsplash, that seems objectively better.

One of the other projects was getting our brand new LG washer and dryer off the concrete floor in our basement – apparently elevating the machines extends their lifespan along with making them easier to use.

Rather than pony up $600 for the official LG laundry pedestals, $70 worth of plywood and 2×4’s along with a borrowed miter saw produced a platform that has been charitably described as “functional.” As an aside, if any of you need to manufacture something similar, I used the plans here, modifying the dimensions slightly for our larger, heavier equipment.

With an assist from my father and brother – my wife didn’t think I should lift the 226 lb washer by myself, oddly – they’re now elevated to a more convenient level. 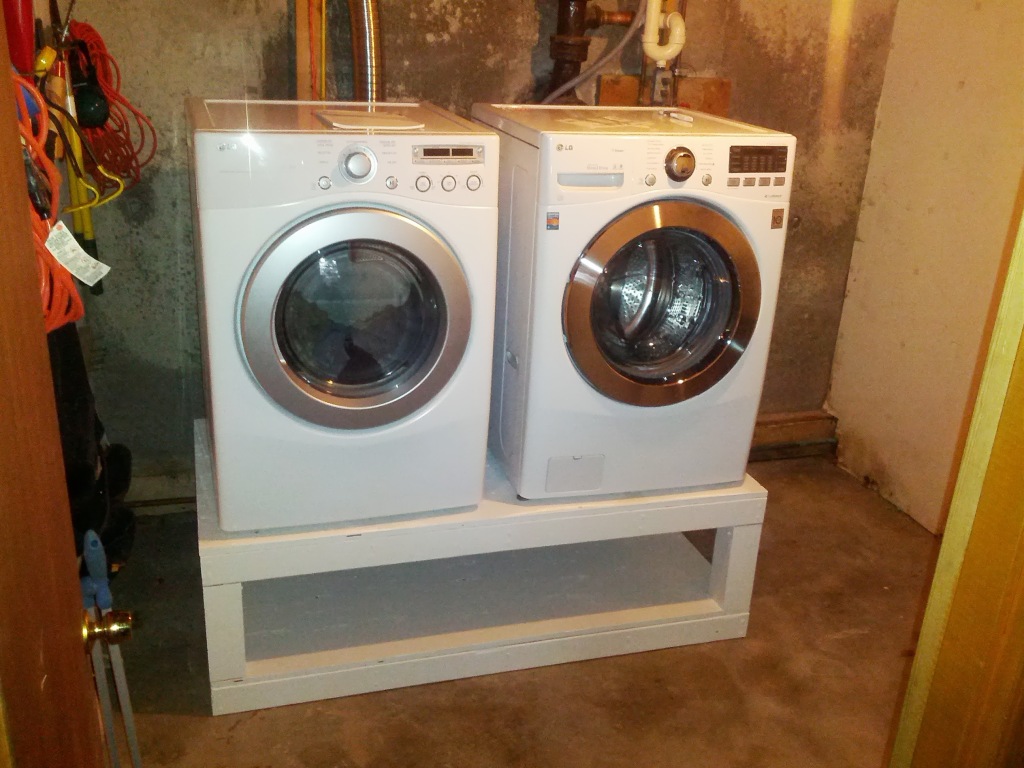 Outside the aforementioned basement, meanwhile, our walkout was a lumpy, uneven and moss penetrated disgusting slab of asphalt. Which tore out, fortunately enough, in sheets courtesy of a pick axe. Into the hole that created went a hundred pounds of stone dust and surplus flagstones my parents had left over from their front walk project.

It needs to settle and then be edged, but as with the kitchen, it’s an improvement even as is.

Interspersed with these larger projects were the predictable volume of smaller ones: leveling the dishwasher, priming and painting unfinished bookshelves, repairing and re-caulking seals in the shower, securing loose water pipes to joists and so on.

All in all, it was a unique vacation. But undeniably a productive one. The other silver lining? Working on a computer never seems more attractive than after you’ve spend a couple of days almost cutting your fingers off with a tile saw.

Tl;dr? I’m really looking forward to getting back to work tomorrow. Vacation is hard.