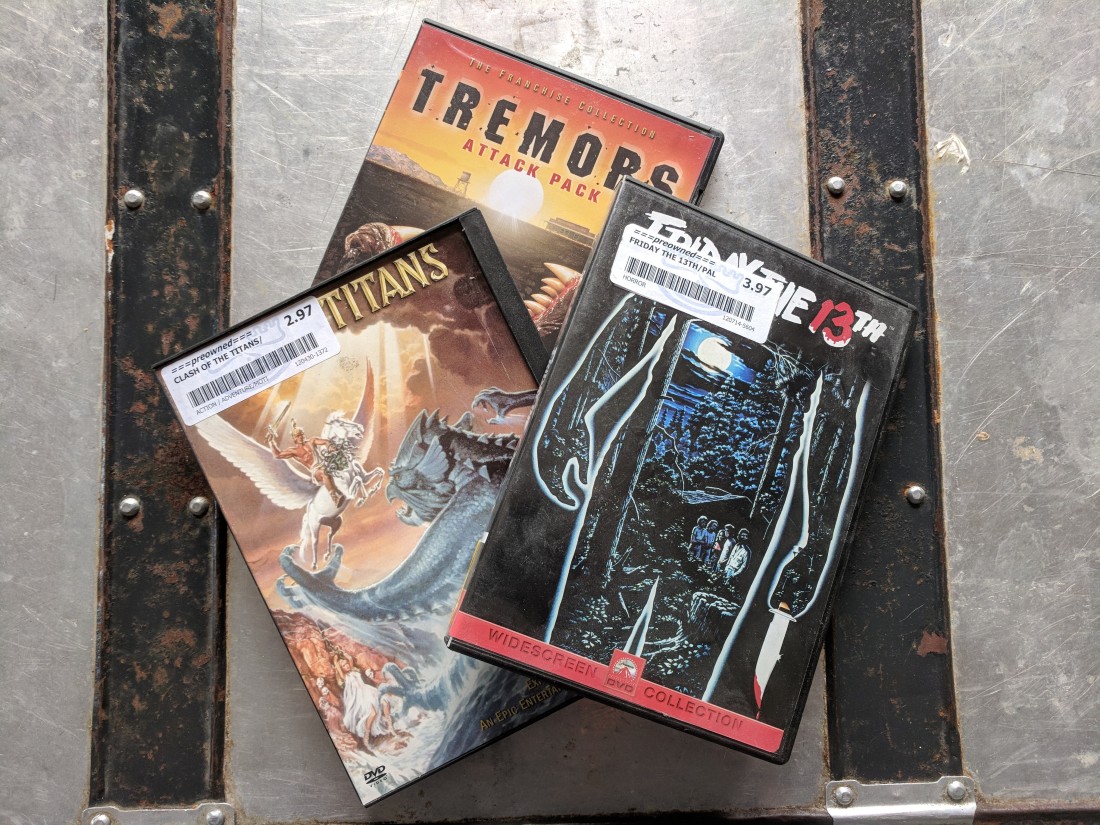 When I watch movies these days, there’s a pretty good chance it’s an old movie. I tell people this, and by old they think I mean classic, but I don’t. I just mean old. I’m no more sitting down to take in Casablanca or Citizen Kane than I am capable of debating the relative merits of Eisenstein, Fellini or Kurosawa. My taste in old movies is no better than my taste in new ones. Which, as even my good friends would admit, is awful.

What I say old movies, what I mean are movies that I grew up with. Because I myself got old somehow, sometime. Some of these movies were out long before I was born, some were out a decade later. Some of them are good, most are not. If I’m really lucky, they’ve found refuge at the back end of Amazon or Netflix catalogs (hello again, Cloak & Dagger and Iron Eagle), but more often than not I have to track them down via used DVD stores (shoutout, Bull Moose).

People who know film will often tell you that movies and TV – TV especially – are in nearly every way fundamentally better products than they were when I was a kid. And while my tastes might betray the relevance of my opinion, this seems correct. Special effects have come a long way, but it’s more than that. Consider the quality of the child actors in movies like Super 8 or series like Stranger Things, for example. With all due respect to the nine year old Drew Barrymore of Firestarter and her contemporaries, the kids today are either better or better directed.

To be sure, not everything has changed – plus ça change, plus c’est la même chose. Movie tropes from my youth, for example – police procedurals, monster flicks, kids rule movies and on and on – are alive and well. But they are infinitely more self aware and better written than they were back in the days when we walked uphill to school both ways in the snow. As a rule, media today is simply more ambitious. In budget, clearly – the production locations for Game of Thrones being Exhibit A. But directors are thinking bigger. When It was filmed in 1990 as a TV miniseries, it was conceived of and delivered as a straight up horror genre entry. When it was turned into a feature film last year, the idea wasn’t to make a great horror movie, but a great movie, full stop.

All of which is an odd setup: if these old movies are objectively worse, why watch them? It’s not like there is or will be any shortage of new content available.

As it turns out, there are a number of reasons.

Some of it, of course, is raw, unfiltered nostalgia. The memories attached to some of these movies are so vivid that I can almost feel my little brother sitting next to me at the foot of our parents’ bed while we eat Swanson’s TV Dinners. No matter how bad some of these movies are, the narcotic effect of the memories they trigger is a far more compelling reward than technically excellent but more distant films of today.

My deep attachment to Jaws, for example, began the day my Dad let my friend Annie from across the street and I watch it on our Betamax set when we were *maybe* five (Annie’s Mom was not thrilled). On the other end of the spectrum, I’m not sure my little brother has ever really recovered from the time we watched Prom Night with our babysitter, Annie’s older brother.

One of those films is widely regarded as a magnificent accomplishment, the first and still best summer blockbuster. The other was considered a derivative, fortunately non-terminal career mistake for a young Jamie Lee Curtis. The memories these movies bring back, however, are not proportional to their critical regard.

There’s also the fact that in these multi-tasking, distracted days, the advantage of an old movie is that I’ve seen it before and therefore only need to devote a portion of my attention to it, much as you might put on classical music while you work.

And then there’s the novelty factor. You never know when someone essential to your childhood will show up in an early role. Why is Indy slumming it as a drag racer in American Graffiti? Is Kevin Bacon really going to be one of the red shirt camp counselors in Friday the 13th?

But the real reason I watch these things isn’t the cameos, the fact that I know some of them by heart or even the sepia trips down memory lane. What I’ve come to realize in watching the movies of my childhood is that all of them, quite unintentionally, are period pieces. Whether fresh or rotten on the Tomatometer, these movies are history. Mine, the cast and crews’, and the country’s.

They’re an answer to a fundamental question: what’s changed between now and then, and has it changed for the better?

These are just a small handful of examples – old movies are absolutely littered with history. It seems safe to assume, in fact, that they’ve been the subject of thousands of graduate theses whose readership is measured in single digits. But for my fellow non-film geeks, go watch an old movie sometime. Come for the less cynical, jaded and graphic plotlines, stay for the intoxicating look at how life used to be.