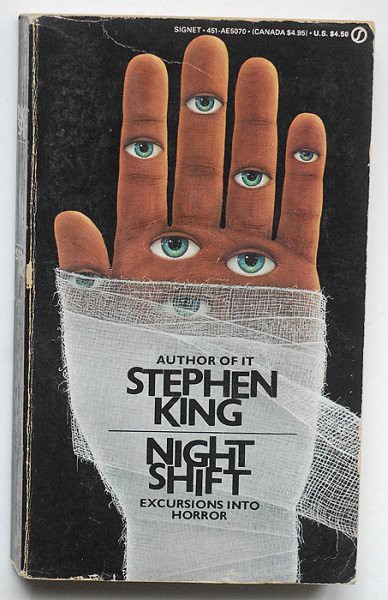 The last physical book I read was a well worn 1978 paperback copy of Stephen King’s short story collection Night Shift on January 2nd of this year. The fact that I can tell you this says more than I’d like it to about my changing relationship with books.

I’ve always had a lot of books. My parents, both readers, encouraged my brother and I to read at an early age first by reading books to us and then by buying them for us. Old enough to buy them on my own, I did, in volume. I’ve moved maybe a dozen times since college, and the only thing that followed me from state to state, city to city was my books. Boxes and boxes, all heavy, of books. Kate is just as bad. Between us we’ve got one entire room paneled with books, one half of another and two more large bookshelves filled with boxes left over. This is with the majority of the books from my childhood still with my parents.

My problem isn’t that I don’t love books. It’s that convenience kills.

I was an easy and early convert to digital music. I appreciate the affection that many maintain for physical recordings, particularly vinyl. But I could not get rid of my physical music collection fast enough. This was literally true: between small, slow spinning disks and anemic processors hard pressed to compress my CD’s efficiently, converting to digital music was a chore. And yet one I embraced.

Books, though, held out.

I’ve been traveling heavily for almost twenty years. For maybe nine or ten months of every year, I spend some portion of those months on the proverbial plane, train or automobile headed somewhere to do something. For the majority of that decade plus, I dragged physical books with me. One of the most important parts of my pre-flight ritual, in fact, was ensuring that I’d packed enough reading material to get me through a trip – the alternative being paying twice as much for a book I didn’t actually want at an airport Hudson News.

It’s true that for a part of the last decade my alternatives to physical books were limited. The Kindle wasn’t introduced until 2007, and the e-readers that predated it were primitive in design and limited in titles. As for audiobooks, they were both expensive and difficult to manage on the basic interfaces of the first iPods. But the Kindle has been a practical replacement for physical media for most of its lifespan, which is seven years now. As for audiobooks, I haven’t really had any excuses about avoiding them since getting my first iPhone in December of 2007.

Through 2012, however, I resisted. An audiobook here, a free classic on the Kindle app there, but most of all good physical books. Looking back, however, I’m fairly confident I haven’t read an actual book since then. There was no epiphany, no breaking point, no watershed decision that I can recall. The surrender was so gradual, actually, that I missed it.

The good news is that I’m reading as much or more than in years past. The internet and its infinite distractions notwithstanding, I’ve plowed through everything from McCullough’s 1776 to Wasik and Murphy’s Rabid to Chandler’s the Lady in the Lake in one digital format or another. I even made it halfway through Bleak House before half a dozen people on Twitter talked me out of it. When I’m on a plane, the Kindle app is open unless the Red Sox are on in-flight TV or I’ve got a deadline to meet. And while my commute is less than half of what it was before we moved to Freeport, that’s forty minutes per day that I can reallocate to a book.

The bad news is only bad news, I guess, if you appreciate physical books. The bad news, then, is that I’m is going on sixteen months where I’ve opened one once. As much as I’ve tried to reintegrate them into my life, it’s not exactly taking. Maybe it’ll be different sitting out on the deck by the river this summer, but I’m not hopeful. Which is actually the worse news. Bad as not reading books is, not being able to even project to read any for the foreseeable future is downright depressing.

There’s no getting around it: audiobooks and ebooks are simply more convenient than their physical counterparts. One of the biggest advantages they enjoyed, meanwhile, was eliminated by the FAA when the organization did away with its restrictions on phone/tablet usage during takeoff and landing.

That said, I’m not giving up on a comeback for the real thing. And I’m certainly not giving up my books. As long as they’re kicking around, there’s always the chance that I’ll find the key to getting back on that particular horse. And worst case, there’s something comforting about having them around, even if it’s just as a reminder of how life used to be.

View all posts by sog

One thought on “I Remember Books”